What do SmartyGirlEntertainment readers like to do on Saturday? What’s your wish list for the weekend if you live near San Francisco? Write your comments below.

This Saturday, my husband asked me out on an all day date. What did we do? Where did we go?

Part of the fun for me is the anticipation. I thought, “Will he take me to some of the San Francisco sights that I mentioned during my work week?”

I was thinking about the popular bar that I see people flock to near AT&T ballpark. It’s right across from a gourmet grilled cheese place that seems so perfect for chilly San Francisco. Would he take me to brunch at San Francisco’s Palace Hotel that I walk past, to work, every morning?

Instead he took me to hike a Redwood Regional Park Forest just six miles from our home. We caught up with each other. I told him about my upcoming guest blog posts by Morgan of La Chapstique Fanatique on fashion and home decor. Then I asked him about the status of his farm in Farmville. He’s growing more dinosaurs and mongoose salesmen! I also inquired about his goal of acquiring the Emma Frost character on Marvel Avengers Alliance.

I stirred up the Marvel conversation because I’ve been bugging him to come with me to The Cartoon Art Museum. I enjoyed my first visit solo to The Cartoon Art Museum of San Francisco. It’s an attraction that SmartyGirls shouldn’t miss. Besides viewing the original drawings for Darth Vader and Son, it’s where I learned about the character The Black Panther. Nik tells me in some drawings he looks like Superman. My friend Karrie told me about the virtues of The Black Canary after my trip. Interesting character analysis to explore!

Back to the hiking.

The Redwoods are near Oakland. This one featured a fishway. It is famous for rainbow trout and golden newts. I love newts and salamanders. But I didn’t get to see one today. Once, when Nik took me to wade in the American River in the old goldmining town of Coloma I got to visit a newt in a terranium. Nik tends to choose a good mix of city and outdoorsy dates for us.

We walked the Bridle Trail and the Fern Trail. It was before noon but the two picnic areas we explored were already reserved. One of these days, Nik says we’ll bring something to grill there for a fun bbq!

It was a light hike that only required a bottle of water each and a column of peanut butter crackers. We ate chicken schwarma like the Avengers at a local restaurant by Lafayette’s Trader Joe’s.

Nik played an hour of volleyball at his company picnic on Friday so his arms were a bit sore.

He still wanted more of the outdoors so he planned our date day at the Redwood Park. Instead of exploring San Francisco attractions this week, we took advantage of the hiking near our home and a bite from a local eatery.

There will be time to visit The Cartoon Art Museum, AT&T ballpark, the 21st Amendment Bar, the American Grilled Cheese Kitchen and the Palace Hotel in later weeks. Give me your review of these San Francisco attractions, in the comments section, if you have been to these places this summer! 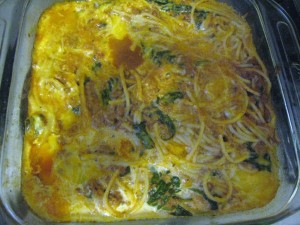 We weren’t used to 60 degree temperatures in July, after living in Los Angeles, so we decided to play Heroscape and other boardgames this evening and homemade baked spaghetti.

Step 2: Add fennel seeds, red wine and spaghetti sauce to meat in skillet. Cook until meat is no longer pink about 12 minutes.

Step 3: Add spinach and allow to wilt into sauce 5 minutes. Add cooked spaghetti noodles and heat through in sauce.
Step 4: Pour meat sauce and pasta into an oven safe dish. Pour half and half over noodles and sprinkle with cheese. Bake at 350 degrees Fahrenheit until cheese melts.

Hot pasta on a cold evening and a cozy boardgame with Marro Warriors and Samurai! On this chilly Saturday, a hike, a homecooked meal and a science fiction/fantasy boardgame was just was we needed!