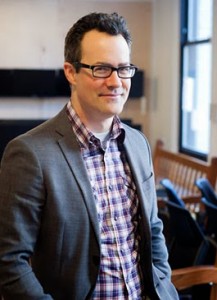 Technology journalist Clive Thompson is a positive guy.  In the past few months, he’s argued that drug dealers have opened our eyes to an important privacy tool.  He’s written that bad bloggers are a net positive for our society (Hopefully my posts contribute in a different way).  But the definitive proof of his optimism is that in our hour-long conversation on web culture and where it’s taking us, I didn’t hear one jaded thought.  Maybe that’s setting the bar a bit low, but Clive’s perspective is exceedingly rare.
I brought up that his new book, Smarter Than You Think was described as the antithesis to another published author, and he just joked that there might be more than one person who disagrees with him.  You don’t need more than anecdotes to know how many people loathe the smartphone generation.  They insist that we don’t live in the moment because we’re too eager to capture it in square-cropped sepia tone, or that we meet friends for dinner and spend the majority of our attention texting the ones who couldn’t make it.  That sort of thing. 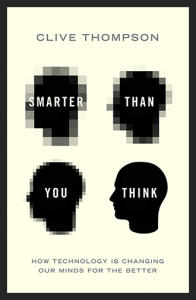 Time and again my grandmother laments that people never pick up the phone anymore.  But Clive points out that there was a time when a telephone was seen as a barrier to healthy communication.  People weren’t face to face for every conversation, but did that make things worse?  100+ years after the invention, we realize that it’s not a replacement to the natural human experience, but a supplement.  It creates conversations that wouldn’t have happened otherwise.  If history is any indication, we’ll look back on Facebook/Twitter/SMS as services that gave us a level of communication that wasn’t possible before they came along.
But perhaps the most revolutionary effect of today’s communication technologies has nothing to do with staying in touch with friends, but with making new ones.  It’s so easy to connect with people we never could have met 20 years ago.  And yes, this opens us up to stubborn forum trolls and malicious YouTube commenters, but it creates so many opportunities.  Clive’s strongest intellectual connections have come about through blogs and Twitter.  He finds people around the world who will discuss Canadian poetry, since his Brooklyn neighbors might not be so interested.  He can discuss his columns with readers who share his views, and maybe more powerfully, those who think differently.  Clive emphasizes, “One thing I’ve learned from seeing people’s reactions online: People are weirder than you would ever imagine they would be, more unpredictable than you would ever imagine they would be…The thing I say over and over in my book, is that we need to have a diversity.”
I asked Clive why he wrote a book instead of saving his ideas for columns and blog posts.  His call for diversity extends beyond the people we talk to.  “I was interested in the challenge of creating a sustained, big long argument…If you believe what I argue in my book, which is that there are productively different forms of thinking that happen online that are different from offline, then the reverse is still true.  From getting drunk with your friend and arguing, all the way to immersing yourself in a book for 5 hours.”
Probably not a surprise by now, but I’m on board with Clive’s ideas.  Except maybe his wish to bring “Global Information Superhighway” back en vogue.  Like he says, things have definitely changed for the better.