Our Editor-in-Chief Renee Marchol has interviewed guests on the perspective of Asian masculinity in the entertainment industry. However, in her Amazon Audible Tinder Manual audiobook, she confesses that she has never been asked out by a man of Indian ancestry. So our staff invited Comedian Vivek Mahbubani to give his humorous take on race relations and family approval. His wit can be heard in English and in Cantonese Chinese as he performs in Hong Kong. The South China Morning Post featured a video titled “Discrimination is a punchline for Hong Kong-born comedian Vivek Mahbubani.

Just as those who identify New York as their home call themselves New Yorkers, Vivek refers to himself as a Hong Konger where he has lived among the Hong Kong Chinese as a minority.

His guest post “Why Indian Hong Konger Men Don’t Ask Renee for a Date” is below:

When most people think of super heroes or saviors, it’s very rare to find someone dreaming of being saved by an Indian person. Even if they did, chances are their super power would either be a combination of constant wobbling and dance moves or radioactive body hair that can hypnotize even the strongest of minds…

… until recently. With the explosion of Bollywood worldwide that has put the brown man on the map of not just being sexy but also being sensual, the value of the Indian man has gone up and so has their pickiness.

A generation ago, dating would often be limited to your own circle or what is available in your neighborhood or network. Traditions played a big part and family was the key. Interracial relationships were not the norm for the Indian man mostly because he’d have to deal with the extra questions from family and also have the challenge of explaining to his children why they’re not the same shade as their relatives.

But today, with the improvement of the Indian man’s confidence and image in the world thanks to a new wave of Indian talents, from Sundar Pichai becoming the CEO of Google to Aamir Khan winning over the hearts of everyone with his wise words and perfect abs in the movie 3 idiots, the typical Indian man now has new images of success they can replicate. Sure, we may not be Google’s CEO, but we feel like we play a big part in its functioning, after all, Google seems to know us really well with its constant suggestions and ads that match our tastes, and fine, we don’t have Aamir Khan’s abs, but we’re surrounded by 2 other idiots at all times, so we’re halfway there. Combine that with the new wave of International love stories we’re surrounded by and you’ve got yourself a very picky person.

But no matter how much the world gives the Indian man these ideas of anything is possible, at the end of the day, there’s still the universal factor that the Indian man has to deal with – his family.

Ultimately, if you’re able to be the girl-next-door but also have that wild-side while still making sure family comes first without compromising the idea that you need to take good care of the guy, then you stand a good chance of getting along just fine. The problem isn’t in your doing all those things, it’s in you being able to send that message to the guy so he realizes you’re someone that fits the bill and asks you out.

Having said all that, why is it that Indian Hong Konger men aren’t asking Editor-in-chief Renee for a date? I suppose the first thing would be for Renee to think about what she wants in a man. Not all Indian Hong Konger men are created equal. Some place beauty over brains, others place family over fun while others might have wacky over well-being. If Renee is looking for the man that can go on the wild side with her every now and then but still wants to make sure they’re both in bed by 11pm, you’ll probably want to look at the self-made Indian man who dwells amongst big social events and conferences where business is the primary item on the agenda. After all, they made their own business through lots of trial-and-error and chances are they’ll take that mentality to every aspect of their life, even in what makes their partner happy.

Alternatively, looking for the Indian man because brown and hairy fascinate Renee, well then you’ll probably want someone who embraces the Indian identity. There are lots of Indian parties where the music is blasting Bhangra beats and the men are dancing. This is your golden opportunity to let these guys know that you know how to party the way they do. Before you know it, you’ll be deep in a conversation about life after the party winds down and they’ll be ready to go on a formal date with you the next time you speak on the phone.

Ultimately, the best way to get an Indian man to ask you out is the same as getting him to invest his money into prime real estate – location, location, location. Be at the right places frequently and just like Google’s ads that constantly hound you in every corner of your screen with what it thinks is right for you, the Indian man will eventually notice you everywhere and figure part of the special club and ask you out. If not, at least you can enjoy the fun of dancing around at least 3 idiots at all times when the Bhangra beat drops. 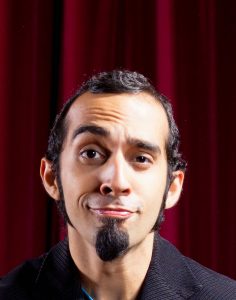 Vivek Mahbubani is best known as Hong Kong’s top English and Cantonese stand-up comedian. Being bi-lingual allows him to both laugh and get offended in multiple languages. For more of his entertainment, visit http://funnyvivek.com

My dad made the best homemade char siu. That’s Chinese-style bbq pork. It usually has a sweet red glaze and lovely black scorch marks from the oven or grill. You can find bbq pork in bulk at family-owned Chinese hot-foods outlets. Where can you find char siu in slab-form? Photo Credit: Creative Commons Chinese Hot […]