Do you like gray and mustard zig zags? What if you could have Holly Golightly’s apartment? You might be in for a treat for the New Year 2013.

Take a peek at these two bloggers and Benjamin Moore’s prediction about home decor color trends for 2012:

Send me photos of your apartment makeover using this 2013 palette! For more detail, I recommend reading Kelly Walter’s article on HGTV about the use of cinnamon brown and pearlized gray.

My first PEZ dispenser was Woodstock, licensed by Peanuts by Charles Schultz. I would taste the fruit-flavored PEZ blocks and compare them to my grape and rust-flavored Flintstone vitamins.

My brother, Kerwin, was a toddler at that time and I had to keep my dispenser and the PEZ candy away from him. Some parents toy safety guides say that if a toy can pass through the center of a toilet paper roll, it may serve as a choking hazard for toddlers. For more information on child safety, take a peek at this article titled, “Toddler-friendly dinner party” before the holidays!

So my little bro busied himself coloring in my Sinbad the Sailer storybook. He told me that one of the sea monsters encountered by Sinbad looked like an elasmosauras aquatic dinosaur. The SmartyGuy!

If you are an aunt or a parent, what seems to interest the toddlers you know? It is the natural world? Do trains, planes and other vehicles that make noise fascinate your little boy or girl? What are your thoughts?

What would you nominate as best toys for toddlers for Christmas Toys 2012? The Bay Area Parents Magazine has a few suggestions and so does Babble in its Holiday Toys section. Do you agree with the article 7 Toys Little Girls Will Love?

How about suggestions for cheap toys for less than $30?

If your toddler can’t consume PEZ candy safely, he or she may still enjoy a 10 minute viewing of the PEZ Museum of Burlingame. Lift your child, high and away from “no touch” displays. You and the child will enjoy the bright happy colors and the stories of toys that were the contemporary of PEZ in the 1950s. The exhibits include a radioactive set (with toxic samples removed) that was pulled off the market!

The travel photo above is my holiday picture for the end of 2012, taken in front of the Guiness Book of World Records’ Largest Snowman PEZ dispenser!

Currently I work as a Promotions Coordinator in the Marketing department of an undisclosed, Games and Entertainment company in San Francisco. As a copywriter and social media specialist, I have the opportunity to monitor SEO metrics on campaigns. I also get to be surrounded by creative individuals!

On my morning off, I took the tour of the Burlingame PEZ Museum. Why? Because a writer never stops researching.

The docent gave me a tour, for $3, of the single room. The museum looks much like one-room of a comics and hobby shop but the live tour is what elevates the trip!

First, I was shown a poster of the first PEZ. Did you know that PEZ is an Austrian rather than American company? I didn’t. PEZ is an abbreviation of peppermint in German. This is the first flavor of PEZ candy.

Then, I lingered at the banned toy exhibit and asked the tour guide for the story behind three toys that were pulled off the market: lawn darts, an infamous Cabbage Patch Doll, and a talking Teletubbies Poe.

Do you remember re-runs of Casper the ghost on weekday mornings before elementary school? I do, as a child of the 1980s. Casper, Mickey Mouse and Popeye were three of first cartoon character dispensers!

At a job interview for a copywriter opening last week, I was asked recently which superhero’s powers would I like?

Then the interviewer and I got into a fun discussion about how she finds the jet when it’s invisible and how she can see the invisible control panel as a pilot. Wonder Woman is super-skilled!

A domestic violence specialist, commenting on last month’s focus on Domestic Abuse Awareness, said that women who stay in abusive relationships are motivated by three things: fear, love, and hope.

As SmartyGirlLeaders, what are your thoughts?

November is a month for thankfulness and I’m asking 15 SmartyGirl Readers to contribute autobiographical inspiring stories to empower younger women.

This user-content contest is inspired by three seemingly disparate sources: An article on Black Girls Code by a Bay Area Parents contributing writer, Our Black Year by Maggie Anderson, and Sean Covey’s 7 Habits of Effective Teens. One of the 15 SmartyGirl Readers, selected for her story, will receive a $15 gift card on January 15, 2013.

I am wondering what if we as adult women, empowered teen girls to know their innate value and dignity?

I don’t have the exhaustive solution to society’s challenges but I would like to know your recommendations.

Share your ideas here. What are some non-profits that you admire? What role models do young women have nowadays? How are you encouraging the next generation of SmartyGirlLeaders?

During this month of Thankfulness and Reflection, I ask you: What current resources would you share with a protege to develop them into a SmartyGirlLeader? 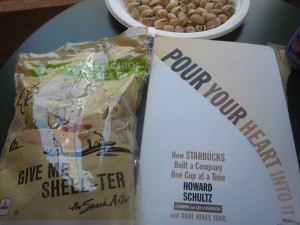 1. Maggie Anderson and her husband, writers of Our Black Year and both MBAs from top schools in the nation, set out on an “Empowerment Experiment” to determine how their small household’s purchasing decisions can affect a community for a year. Start a conversation, as a listener, to a teen girl. What does she think about racial differences and the economy? What sparks her intellectual curiosity?

2. Kimberly Brant, founder of Black Girls Code, said she felt “culturally isolated” when she took a less common path of study. How does your protege combat feelings of loneliness when she resists peer pressure? As a minority and as a young African American girl, do you feel you are expected to work three times harder to earn 1/2 the respect freely given to others?
3. Take the teen inventory in The 7 Habits of Effective Teens. Sean Covey asks temperament questions in an easy 4-column survey. When finished, you’ll gain more insight into things to watch out for. For example, this fun self-assessment classifies temperament into grape, orange, banana and melon.

Those who fit the Grape  tendencies may excel in imagination but risk making too may long-term decisions on fleeting emotions. As SmartyGirlLeaders, we are constantly changing and improving. Right? Take this inventory and allow your protege to share her results with you. Respect her boundaries and empower her by allowing her to keep what she learns private, if she chooses.

Check out 5 Fabulous Fall Home Decor Ideas on a Budget and Tea News Roundup for Hipster Parents This November! Give your comments and make your own hip, budget-friendly suggestions!