On Wednesday September 2nd, I attended the Moth StorySLAM at Freight & Salvage coffee house in Berkeley.  The Moth hosts a regular radio program called “The Moth Radio Hour” that features the true life stories of ordinary people.  At this live event, produced by Anna MacKinnon,  facilitators pulled 10 or 11 names out of a white bag.  These names, the owners of 22 submitted stories, were then enthusiastically cheered by the audience as they mounted the stage to spin their yarn.  All stories centered on this event’s theme:  Betrayal.

In addition to the audience enjoying the drama of other people’s personal stories, Wednesday’s participants received a score from 1.0 to 10.0 from the three multimember teams of judges: “Brutus,” “Trojan,” and “Karma is a [the one word designation for a pregnant female dog].”

While the audience was limited in their quantitative judgment of the stories by clapping and cheering for the raconteur before and after their presentation, they were given an opportunity to participate in the proceedings as well.  Before the event started, each person entering the auditorium was given a slip of paper with a question typed on it: “Describe a time when you were dishonest.”  The roughly 3in by 7in format forced the individual into a concise retelling.  But it also concisely proved that good stories are not determined by length.  Between each story told on stage, the facilitators randomly selected for reading one to three of these little vignettes from a red container where the audience members deposited them.  This same format was used at the end of the story telling for the other 11 or 12 full stories left over.  Each of the remaining raconteurs spoke a few sentences to convey the “hook” of their tale.

As this was my first time attending such an event for stories, I wasn’t sure whether to expect folksy tales passed down from an older acquaintance, an academically focused anecdote with a clearly delineated theme and form, or something that would be at home in the “True Confession” magazines of old.  It was actually a pleasant mix of all three, where the “older acquaintance” was the storyteller themselves, relating a tale from their own past, whether as recent as 3 years ago, or in a distance youth.  But sometimes the stories included a few added twists.  Two put pets in the instrument or catalysis of the betrayal.  One featured a personal maxim whose owner modified due the number of times it rang falsely.  The very first one retold a perfidious relationship with the human inspiration for the song “You Light Up My Light,” whose number one hit status so shortly after the breakup made coping for the teller exquisitely painful.

But as expect from the personal nature of betrayal, most of the events discussed took a very similar form:  a hurt inflicted by a loved one.   The stories scaled the elegiac range of a high school friend cavalierly revealing an episode of another’s’ “peed pants” in front of romantic interests, to the encouragement of an unsatisfying relationship until “someone better” arrived.   The story that received the highest judges’ score was one of several that related the tale of a(n almost) significant other that decided to end the previously enjoyed relationship.  The judges did not discuss their reason for their scores, but I suspect this one received their highest approval because it was recent enough to still provoked tears in the teller during the relating, and was one for which the teller revealed the ongoing search for resolution.  Plus, it involved the classic rom-com situation of boy meets girl, girl relegates boy to permanent friend status, but realizes her true feelings just as boy decides to move on to greener pastures.

I enjoyed all the recounts, and especially how the storytellers indicated their particular salient point of their tale.  One of the audience’s clear favorites highlighted serendipity’s favor to fools and small children in the form of an unpayable debt to a loan shark, rendered void by said shark’s unexpected death, and overdue accounting.

Another came from two audience members’ terse comments on the provided slips of paper:

I told my girlfriend our breakup wasn’t her fault.  It was.

I told my dad I loved him.

Even the intimations of the untold stories proved fascinating, like the raconteur that briefly stated he wondered how an old acquaintance was doing now, but not knowing was teller’s price for his betrayal.

The facilitators encouraged us to talk to the storytellers after the event ended, especially to the ones that could only tell their hook.  These stories would be comfortably at home in a written collection of short stories.  At least one of them is part of the teller/author’s current writing project.  All of them reminded me that inside each human is at least one story of their life just waiting for the opportunity to leak toward an appreciative light.

Guest Blogger Tabby is a writer and podcaster. If you missed it, she’s also the on-camera interviewer for Indie Arts & Tech for community tv. 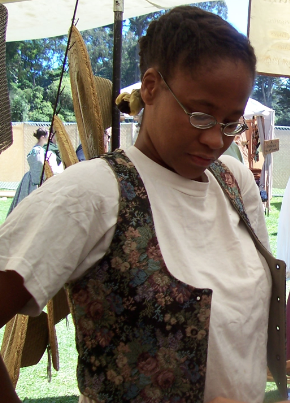