In horror movies, the plucking of string instruments usually signals the crawling of spiders onto someone with arachnophobia. In contrast, imagine a group of camera operators pursuing spiders into the dark for a documentary. 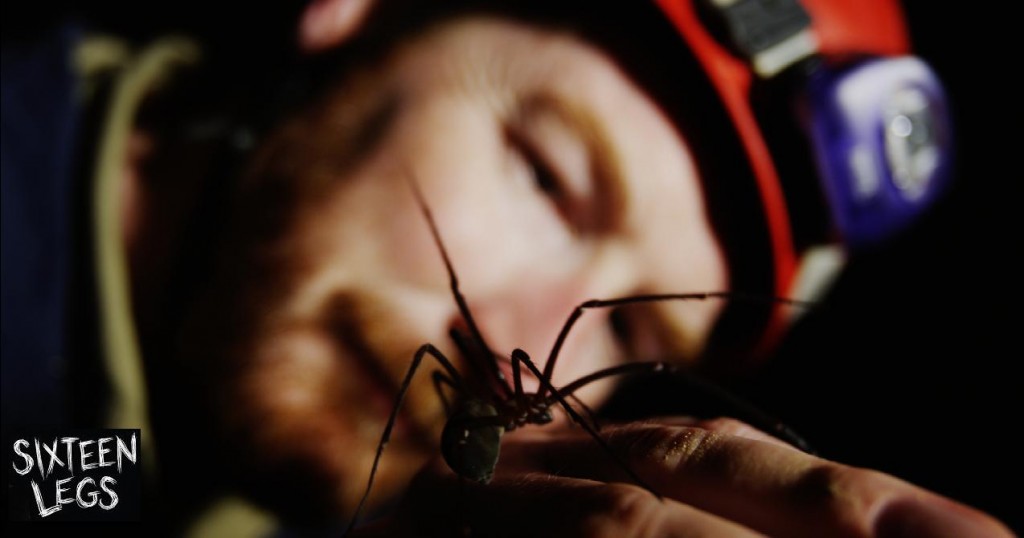 SmartyGirls and SmartyFellas are partnering with Niall Doran from now to Halloween to assist in raising $100,000 towards his awesome-face research.

What did the research require? 19 hours underground with little light and lots of damp and cold. Repeat for 30 days. Then repeat again for 90 days. Continue for 2 years.

Why is SGL partnering with spider documentaries this season? To encourage art, science and filmmaking. As a thought-starter for those considering lifetime career  in science for the environment.

1. In what way can my blog and social media partners assist you with Sixteen legs? Do you hope for more likes? Donations?
We’re definitely happy with more likes/followers, either via Twitter (@BookendTrust) or our Facebook page , and we’re also after schools, teachers and students from around the globe to look at what we’re doing and to be a part of our general education programs – either online, or through touring of our exhibitions and other materials. But at its heart, this current campaign is really about fundraising. Bookend began with a small group of people putting their own money into this work because we believe it’s important to inspire the next generation. We’ve been running this work for a long time now, but this current project (Sixteen Legs) is a bit more than we can manage just on our own!

2. My audience includes filmmakers who are curious what types of gear was used for the shoots in the dark and in water. Tell me how you dealt with conditions.
Given the challenges involved in getting the footage (spiders not liking light or heat, cameras not liking wet & corrosive conditions, and crew not liking extended periods in dangerous dark places) we decided to film at the best resolution available at the time, so that we wouldn’t have to go back to do it all again. The best available at the time was digital 5K with a Red Epic camera, which in turn put limitations on the rock crevices we could access and the focal distances we could work with. Depending on how much background your audience wants on the film-making challenges, here’s some extra info:

(i) A sneak peek at some excerpts from the behind-the-scenes doco, where our DOP discusses the choice of cameras.
(ii) And in much more detail, here’s a link to an article that was run in Australian Cinematographer on
the challenges of the filming

3. How long is your campaign: 6 weeks? We’d like to assist from now to October 31st.

That’s fantastic – any help getting a good response before the end of the month would be greatly appreciated. We’re planning to run the fundraiser to the end of November, although we will need to close off on some items before then so we can get the books printed and delivered before Christmas. That’s especially so for the Deluxe book option, in which people get the books signed by the contributors (including Neil Gaiman) and their name printed inside the book.

At its heart this a quirky, fun and slightly creepy story about giant prehistoric spiders seeking love in the dark. They grow to the size of a dinner-plate and they are still living in the caves of Tasmania. They have a legspan of 18cm (7 inches), and webs that can be six feet or more across. They live in some of Australia’s biggest and deepest caves, and they are of high scientific interest globally as their story spans at least 200 million years. They are survivors from the first age of the dinosaurs; they predate the splitting of the continents when Antarctica, South America and Australia separated (their closest relatives are in Chile and Argentina); they appeared at a crucial junction in global spider evolution; and they have endured throughout the entirety of human civilisation.

Everything about them breaks the usual spider rules: they have complicated and very kinky love lives, they build highly structured egg-sacs that are much more complicated than those of other spiders, the young take longer to merge than other spiders (9 months! instead of 6-8 weeks), and they live for decades (instead of 2-3 years). We’ve pieced together the spider’s life history through 23 years of scientific research, and we have just captured the key facets of all this via 2 years of documentary filming.

By sticking a camera crew underground for months at a time, we’ve finally captured their lifecycle on film, in glorious 5K resolution, and we’re working with best-selling international author Neil Gaiman (Coraline, Sandman, Doctor Who) on a documentary that not only presents the science, but has a ‘dark fairytale’ rendition of the science woven through it. This was recently showcased to an audience of global broadcasters in France as one of only 7 ‘in production’ natural history documentaries selected from around the globe. The main “Sixteen Legs” documentary won’t be finished until next year, but a shorter piece on what it took to film the spiders (“16 Legs: Spider Love”) has just been selected as a finalist at the Banff Mountain Film Festival in Canada, where it will screen in November. It will also be shown in a dual world premiere at the Breath of Fresh Air (BOFA) Film Festival in Australia on the same day (November 9 – both hemispheres on the same day).

We’ve also recently held an exhibition about the filming, complete with 18 foot (!) replicas of the spiders, and there’s a whole range of educational work we’ve been doing on this topic – see http://www.bookendtrust.com/caves for how the whole educational side fits together.

Why are we doing this? We run an education charity called the Bookend Trust, and the successful exposure of this documentary will both promote and support our work. The short version of our mission statement is to “inspire students with the careers they can build making the world a better place”. We started this work as a self-funded group of individuals with backgrounds in science (many of us biologists). Bookend was initially funded through my long service leave and equity on my house. We now draw income from a range of sources, including working as consultants, incoming grants and donations, business sponsorships, and the development of documentary content. The range of projects we run with students has grown dramatically, and although we are based in Tasmania we have participating schools across Australia and around the globe.

A video snapshot of Bookend’s work

Overview of all our projects

We’re not using a typical crowd-funding approach to this project, as the books and other rewards will be available irrespective of the funds raised. However, the fundraising target – if reached – will release an extra reward for one lucky contibutor, and that’s the trip to Tasmania. It’s an opportunity to get to a fantastic far away place with Neil Gaiman, at a time when the exchange rate is good and supporters from the northern hemisphere would be trading winter for summer. The winner will see fantastic behind-the-scenes work with endangered and unusual animals in Tasmania, as well as cultural experiences (such as the world-famous MONA Museum and associated Festivals) and the opportunity to be a part of the filming of Sixteen Legs.

Where to donate/buy fundraising rewards: